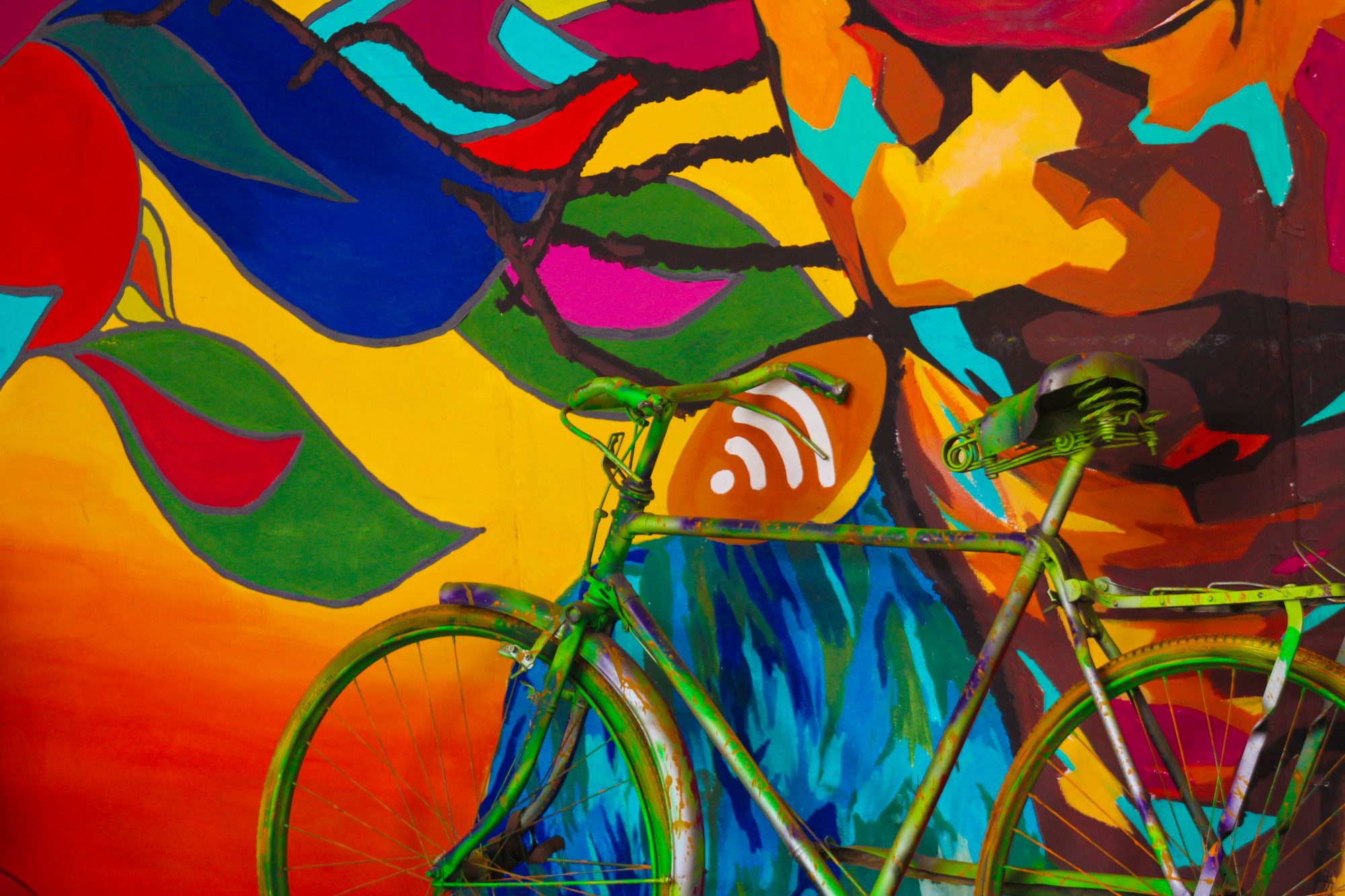 You’ll want to be able to spot your bike in the distance at night. Why? Because you’re going to park it, put it somewhere and go off to a bar, a dance floor, an art installation, something. And then you’re going to be ready for your next adventure, but first you have to find your bike. So make you you light and decorate your bike well at Burning Man… because 70,000 other people will be too!

Don’t be swayed by talks of EL wire and how wrapping a string or two of EL wire around your bike is sufficient. It’s not. I mean, it’s sufficient to make your bike somewhat visible, and EL wire can be fairly durable, but you need to be able to spot your bike among many. And when 10,000 other people have used a strand or two of EL wire to decorate their bikes and make them stand out… well, you can see the problem. Your bike won’t stand out very well.

Add bulk light if you can

Collapsible silicone solar lights are pretty cool. You could keep several of these attached and deflated on your bike during the day so that the batteries charge, and then open them up and turn them on at night. They provide an easy way to add bulk light to your bike so that you can spot your bike from a distance.

Sometimes it’ll be easy to find your bike as it may be one among a dozen. Sometimes it won’t be. Depending on where you are, your bike might be one among hundreds. Or among thousands. You might have sworn you put your bike over by that disco duck, but maybe you forgot to consider that said disco duck was an art car that moves, rather than an art installation that is stationery.

Perhaps in your excitement to arrive at a great dance party or in your state of psychedelic joy, you forgot to consider that, like Hansel and Gretel in the woods, you need to know how to get back to where you started. Or maybe, it’s just a challenge to orient yourself in a big, wide open desert at night with dozens or hundreds of bikes around, where art cars crawl by, and camps with flashy lights are all about. Maybe it’s all so much for your brain to take in and, well, you don’t remember where you put your bike.

You need a front bike light for when you’re out in deep playa and need to 1) be visible to others and and 2) shoot a beam of light in front of you. You’ll discover soon enough that soft playa out in deep playa is something you want to avoid on your bike (bikes go from clipping along to sinking into the soft sand-like dust in an instant), and if your front light supports that goal of avoiding soft playa spots, that alone makes them well worth bringing.

Remember to turn this front light off when closer into the city and near more people, as the bright light can be a bit much.

Get lots of decorative lights for your bike

Bring lots, lots and lots of lights! Or bring fewer really good quality lights. It can seem a better choice to go with lots of cheap lights, but the desert is harsh on electronics and gear. Cheap lights often break, fall off your bike or never even work from the get-go. Bring back-ups and multiples of any lights you purchase. Better yet, purchase lights that are better quality, lights meant for joggers and pets work especially well.

You have to figure out how you’re going to adhere said lights. Easier said than done in many cases. Lots of people light their bike baskets in very distinct and beautiful ways. Lighting your bike basket is a way to create bulk, or concentrated, light which is easier to spot from a distance.

Rim lights … these are especially nice when riding in a group

You can add rim lights to your bike wheels. If you’re with a group and you can coordinate it, it’s a great idea to get the same colored lights and decorate your bikes in a light-color theme. Clumps of similar colored (and maybe even similarly decorated) lights are easier to spot in the distance than, for example, six independently decorated and lit bikes. This approach of group lighting for bodies and bikes is really neat. Quite distinct! Though more and more groups (and individuals) are doing it so it’s less distinct with each passing year.

It helps to make your bike visually distinct, both day and night. Some people take this distinction-making to artful extremes and others to creative endeavors of distinction. You can do something as simple as attach a small stuffed animal to your handlebars (easy enough to buy at a thrift store), so there is a unique shape on your bike you can recognize from a short distance.

Find something that helps you spot your bike among the throngs of dusty-by-day bikes and the dusty-and-lit-at-night bikes. Be careful about potentially MOOPy items such as plastic flowers, pompons or any craft materials that will not take a strong wind, sun and dust beating well. Stuff gets trashed at Burning Man, so think about durability when decorating your bike.

Finding your dusty bike—day or night—in a dust storm, or amidst hundreds of other dusty bikes, can be more challenging than you might possibly be able to envision at this moment. A remote doorbell chime can help here! Alas, I’ve owned one for several years and bring it out to the playa each year, though I’ve yet to set it up. Sounds like a great idea, and I was motivated to do this after this experience I had where I almost lost my bike in a crowd.

One year, a lovely friend, a first-timer, and I went to the temple burn, riding our bikes to get there. My friend was a virgin, and when we’d arrived and parked our bikes, I asked him if he had a good sense of where we could find our bikes later. (I was unwisely doing the I-have-no-sense-of-direction damsel-in-distress thing.) He said he did, and even though my spidey senses were saying otherwise, I didn’t pay attention to where we parked our bikes.

After the glorious temple burn and milling around for awhile in the glow of the fire, we headed back to get our bikes. We walked in the area that felt right. Searched for our bikes. And walked and searched some more. We could not find our bikes!

I asked my virgin friend where he thought we left our bikes, and he said it was by a big ship. Alas, said ship was an art car, and it had jaunted off to other adventures after the temple burn. (I let that sink in for him and, for myself, and vowed to never assume someone else was responsible for knowing my bike’s location, ever again. Nor to ever use an art car as a marker!)

After a good long time of walking around, enough people had left the area, which meant there were fewer bikes to search among. Finally, I saw a distinct blinky light (faintly, faintly blinking) and knew we had found our bikes. But, oy! That was close.

See, a good 60,000-plus others have the same goal in mind of making their bikes distinct, so at least attempt to make your bike distinct…day and night. You may or may not succeed, but you’ll at least give yourself a better chance of finding your bike. And, if you like the idea of the wireless doorbell chime, try that.

How to add fur to a Burning Man bike

DIY ideas for decorating your bike

I’m not a fan of the gas-powered engines and I don’t know (don’t believe) they are sanctioned. Speed is not necessarily a good thing at Burning Man: 1) because you miss stuff and opportunities to engage 2) because the city is a pedestrian-focused city and their needs trump, always.

This site uses Akismet to reduce spam. Learn how your comment data is processed.