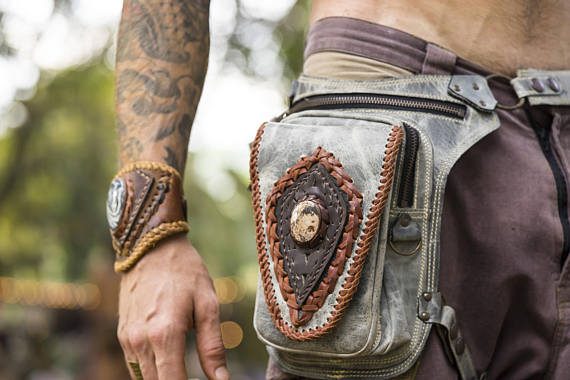 It’s not a fanny pack. It’s a festival belt! There are many varieties of festival belts, from beautifully crafted custom-designed belts all the way down to Home Depot-like tool belts. One could even argue that the early model of festival belts was the fanny pack of the ’80s. If you’re a Burning Man virgin, I would encourage you try using a festival belt and see how it works for you. Get one. Get a few. Etsy is your go-to source here.

Especially during the day, when carrying a backpack means having something against your sweaty skin, a festival belt on your hips can be quite useful. At night, too, they’re great for being less-burdened by a backpack. I lean toward overpacking, so I often have a backpack with me at night (and day).

Personally, after attending dozens of regionals and That Thing in the Desert a handful of times, I find I don’t use festival belts. I’ve probably purchased and later gifted at least half a dozen of them by now… of all sorts and styles. It’s not a look I like on me, though it’s a look I like on a lot of other people (women and men), and they can be really useful and practical.

I use a small over-the-shoulder bag, which is not nearly as useful nor as practical as a festival belt, though I feel more comfortable with this choice. And I use my pockets, as available.

Retractable reels are quite useful

I like having a few retractable reels to attach to my bags and gear. They’re great for items such as lip balms, small hand sanitizers, lighters and anything small you want to access often and easily.

The photo of the belt featured here is from El Gato Montes, on Etsy. It’s pretty, though it ain’t cheap.

This site uses Akismet to reduce spam. Learn how your comment data is processed.